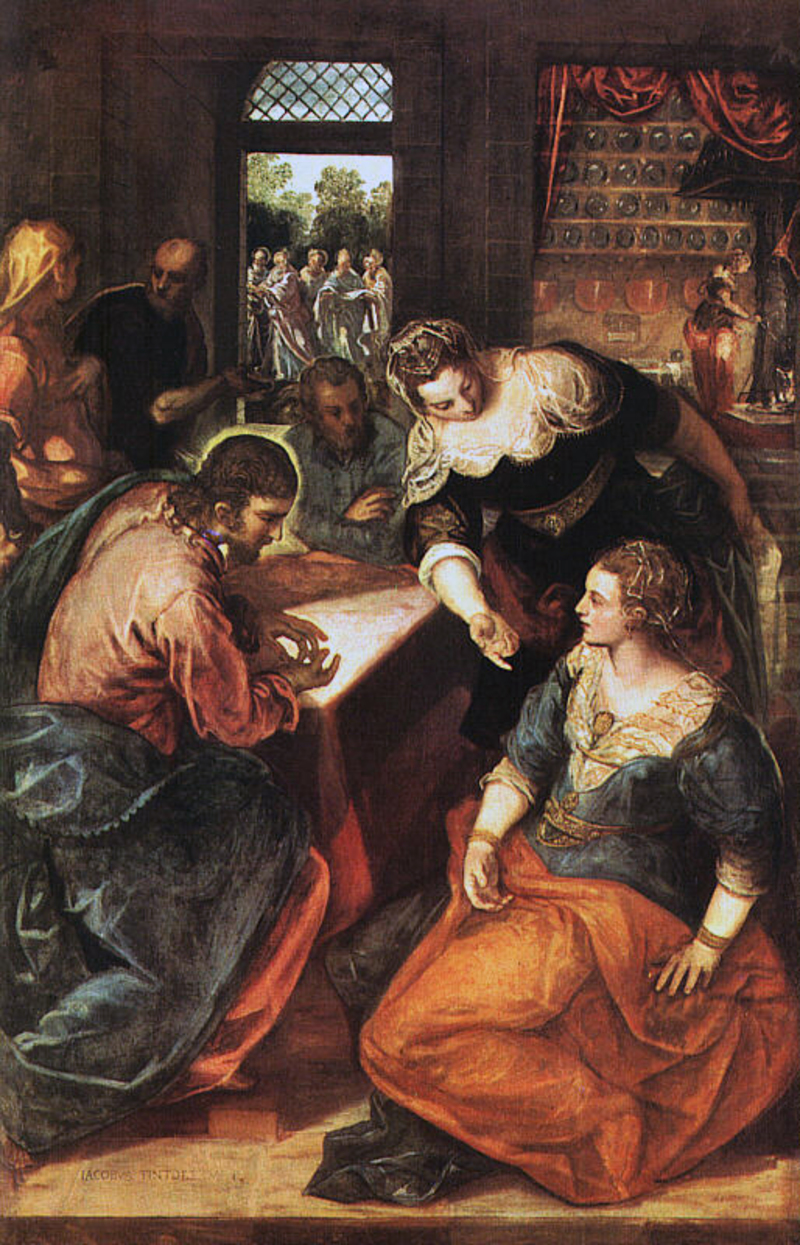 Have you ever noticed that in our culture we tend to see things as either/or rather than both/and? We like dichotomies: this or that, good/bad, better/worse, important/not important. It’s a hangover from a logic and a way of thinking that emerged most strongly during the 18th century Enlightenment in Western Europe. And even though this either/or way of thinking, these dichotomies, can be really helpful in organizing our thoughts and in putting things into categories, other times it can be limiting, and often we need to recover a both/and approach.

Take today’s gospel reading as an example. We need to recover a both/and approach to this brief story about Mary and Martha. Most of us have heard the interpretation of this text in an either/or sort of way: Mary good, Martha no so good, listening to Jesus better, running around getting food ready, worse. Martha, the interpreters say, you should be more like your sister Mary.

There are a lot of us who can relate to Martha. The problem is that when you mix together either/or thinking, family dynamics and men writing about what women should be doing, there’s a lot of room to do damage here. Which is why many people, and especially many women, who lovingly and faithfully serve in the church and beyond, have often felt hurt by the way this scripture passage has been translated and interpreted.

We need to recover a both/and approach to understanding this passage about Mary and Martha.

“Now it came to pass, as they went, that he entered into a certain village: and a certain woman named Martha received him into her house. And she had a sister called Mary, which also sat at Jesus’ feet and heard his word.”

Did you hear that word “also”? It’s not in our modern translation but it is in the original Greek. The expression “to sit at Jesus’ feet and to hear his word” signifies a disciple of Jesus. What the text is telling us is that Martha is a disciple of Jesus, and her sister Mary is also a disciple of Jesus. Both/and, not one or the other. Both Martha and Mary are followers of Jesus, they’re part of his movement. But they’ve been called to different roles. Do you remember the gospel text about the mission of the seventy that we read together two weeks ago? That organized, purposeful movement that Jesus inaugurated, sending them out two by two? Well all those disciples are still traveling with Jesus, it’s a big gang that’s arriving in Bethany. And Martha’s role in this movement is to receive them, to feed them, to provide them with hospitality as they rest and recover. Martha is indeed a disciple, she too has spent time sitting at Jesus feet, hearing his word. But right now, receiving the seventy is her mission, likely given to her by Jesus himself, and it is essential to the movement. Why is this her role? We don’t know for sure, but maybe it’s because she’s the one who has a house to offer to a group of people who are homeless. The mission that each of us is called to often relates to the gifts we can bring to the table.

Mary, Martha’s sister, is also a disciple. But she’s been away. “My sister has left me” says Martha. Mary, in all likelihood, is one of the seventy who has been traveling with Jesus, learning from him and then being sent out to proclaim that the kingdom of God has come near. This too is an important role. Mary and Martha are not to be opposed – both are needed as part of this Jesus’ movement.

It is the mission of the church, of Jesus’ disciples, to both hear and proclaim the word of God and to serve those in need.

However, sometimes the need for service can be overwhelming. If it is truly the case that all seventy of Jesus’ disciples are coming for dinner, you can understand why Martha is feeling worried and distracted and overwhelmed at this moment. You can understand why Martha is crying out for help, and it’s to be expected that she thinks first of her sister Mary. When the need is great, and often it is great, it is very tempting to try to pull all of our resources into serving that need.

We see this same pressure in the life of the church in Acts, in chapter 6. The early church had taken on the mission of serving those in need, of providing food to those who were poor and hungry, widows in particular. But the need was great, and the need was growing, and the disciples tending to this mission of service were getting overwhelmed. And the twelve, whose mission it was to hear and proclaim the word of God, were at risk of neglecting their own role because of the growing need to serve the poor. So what did they do? The early church appointed seven deacons to the role of serving the world so that the twelve apostles could continue their role of hearing and proclaiming the word of God.

Which is what Jesus says to Martha. Again let’s turn to the language of the older King James Version, which does not use the word “only”, a word added by the newer translation but not found in the original Greek, and uses the correct translation of what Mary is doing as good, rather than ‘better’:

“Martha, Martha, thou art careful and troubled about many things: but one thing is needful: and Mary hath chosen that good part, which shall not be taken away from her.”

I think that this message is as relevant for our church today as it was for Mary and Martha, and as it was for the church of Acts Chapter 6.

Our church today is full of Martha’s, people who do the good work of serving this community and the wider world in so many different ways. Thank God for you, this is a true calling, this is your mission, it is good work and you are doing it well. Never let people put you down with their either/or interpretation of this passage.

I know you feel overwhelmed sometimes, I know you get worried or troubled by all there is to do. Hear Jesus’ words to Martha as words of compassion and gratitude for all that you do.

But I think it is also true that our churches can be very busy places, and our lives can become very busy lives, and all the ways that we serve the world can become overwhelming, and the needs of the world are very great. Which is why it is also important to uphold Mary, who also sat at Jesus’ feet and heard his word. We need to take that time to be nurtured in our faith, to pray, to listen and to learn, and then to take the time to tell others what we have heard. In our world, which tends to favour busy-ness, finding the time to do what Mary is doing just may be one of the hardest things of all.

There is no dichotomy here. Each one of us is both Martha and Mary. We both hear and proclaim the word of God and we serve those in need. Each of us brings our unique gifts to the table, each of us will tend to lean one way or the other, and the God who created us will call each one of us to do the work that we were created to do.

It is the mission of the church to both hear and proclaim the word of God and to serve those in need.

Image of painting by Tintoretto - Martha and Mary