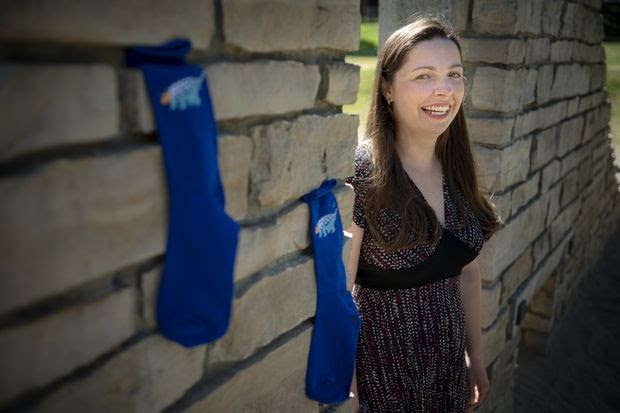 The pitch: Creating The Sock Project

The reason: To fund research into autoimmune diseases

A few years ago Jessica Baird was working as an elementary school teacher in Ottawa when she started experiencing strange medical problems.

At first doctors thought she might have Hodgkin lymphoma, a type of cancer that attacks the immune system. But several months later, around Christmas, 2017, she was diagnosed with ankylosing spondylitis, or AS, a degenerative inflammatory arthritis that affects the spine.

As she grappled with the diagnosis, a friend who has lupus, another autoimmune illness, suggested that Ms. Baird wear a fun pair of socks to every medical appointment to take her mind off things. “So my teacher brain kicked in and I ran with that idea,” Ms. Baird, 33, recalled from her home in Ottawa. “When people started asking me how they could help, I said, ‘Send me fun, silly socks.’ ”

In May, 2017, she did a YouTube video asking people to “send me fun, silly socks on this journey and I’ll wear a fun pair every day of the year.” The socks have been arriving ever since.

Ms. Baird estimated that she’s received 10,000 pairs of socks including 200 last week. She launched the Sock Project and began sending pairs to people with autoimmune illness all over the world. And that was just the start.

She’s now designing and selling her own line of socks to raise money for research into autoimmune diseases. There’s also a children’s book about her story called The Socks, and Ms. Baird is hoping to start a new position this fall as an artist in Ottawa area schools with a focus on the Sock Project.

COVID-19 has been particularly challenging for her and others with autoimmune disease because the body’s immune system becomes overactive and attacks healthy cells. Medication slows down the immune system but that can leave patients vulnerable to viruses. The pandemic “is very, very frightening,” Ms. Baird said. She has been encouraged to get vaccinated but she hasn’t been able to get a shot just yet because of a recent flair up.